It’s not easy to choose an objective indicator for a programming popularity ranking. The following table provides a small overview of existing solutions.

The major criticism of the TOIBE index is that it is actually way behind of what’s actually going on in the programming community. For example, the authors of PYPL describe the TOIBE index as lagging indicator.[2] Another problem is the availability of the TOIBE dataset. It’s fairly safe to assume that almost no one is willing to pay 5.000$ to be able to see how the ranking is actually build. This makes the index intransparent and hard to reproduce. Even if one were to buy the dataset it’s still a mystery why and how TOIBE choose different percentage weights for different data sources resulting in a arbitrary metric, where the ranking can be adjusted just by playing around with the parameters. Because of this we can conclude that the TOIBE Index is a slow and subjective indicator, which is in many cases the opposite of what you want. Let’s see if RedMonk can do any better.

The RedMonk Programming Language Ranking is published in irregular intervals. The latest release was in January 2018. According to RedMonk they use the following criteria to build their ranking:

The RedMonk ranking makes some sensible decision on how to improve the quality of the raw dataset by applying some filters (e.g. no forks) while trying to stay as neutral as possible. However they are missing features, such as historical data and a historical chart. 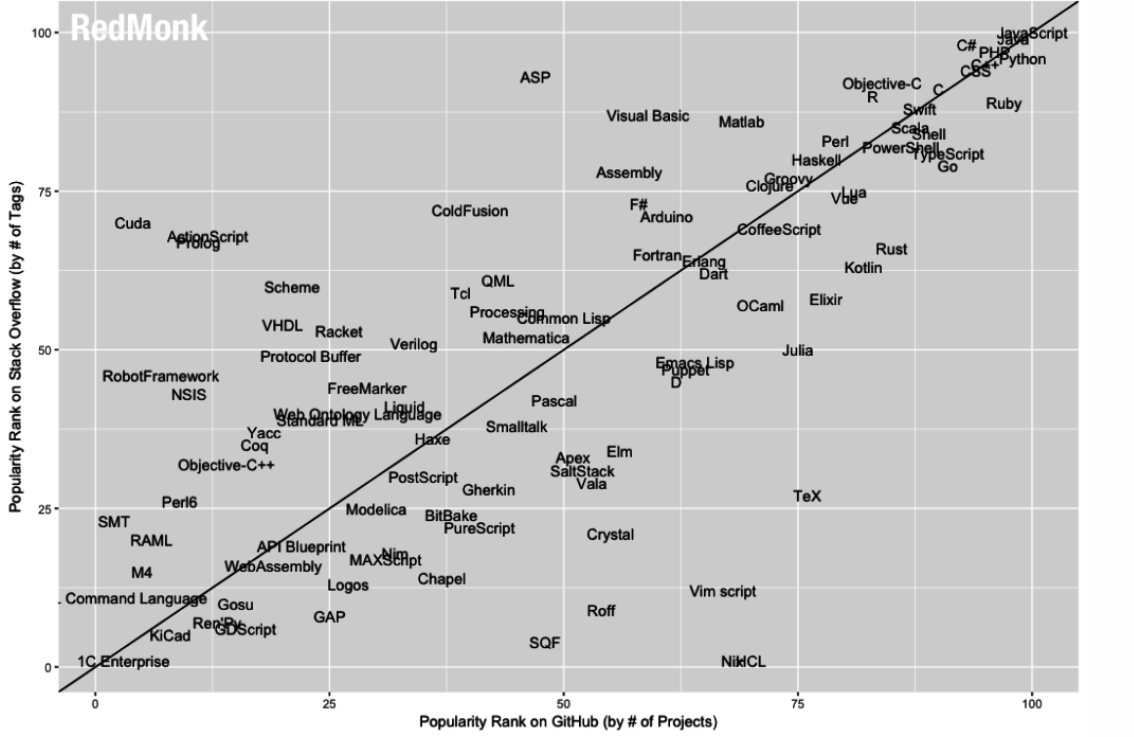 The PYPL PopularitY of Programming Language Index[3] is created by analyzing how often language tutorials are searched on Google. The more a language tutorial for a certain programming language is searched on Google, the more popular the language is assumed to be. Its dataset is based on Google Trends, which makes it quite transparent. The main drawback of PYPL is that it only compares the TOP 22 languages (as of July 2018) and there are no historical rankings. They only provide a historical chart.

There are other rankings worth noting. The octoverse which is a official GitHub source and shows some additional interesting statistics about GitHub. However, their ranking only shows the top 15 programming languages and it does not offer a history, nor does it reveal any informations on how the underlying data has been aggregated. Another one is the Programming Language Popularity chart on https://archive.is/f1ZBZ, which shows a bubble chart with StackOverflow (tags) / GithHub (lines changes) ratio for every language on GitHub in February 2013. It seems as though the chart didn’t received any update since then and can therefore be considered outdated.

Since non of the presented approaches matches my criteria for a sensible, neutral, reproducible, forkable, up to date solution, I decided to create a page that is not based on multiple indicators and weights, but on raw data from one source with a flexibel unbiased metric. The idea to create a neutral and open source analysis of programming language popularity that are used on GitHub is nothing new. The GitHub project http://githut.info provides a good solution. Unfortunately, it received its last update in 2014 and there are many unresolved issues on GitHub, hence we can consider this project as outdated and unmaintained. So I came up with a new approach GitHut 2.0 a successor of GitHut. It shows a ranking with the top 50 languages based on the last quarter. A language trend is calculated as difference from the same quarter of the year before. The percentages shown are the actual fractions of Pull Requests, Pushes, Stars and Issues, which represents the underlying metric of the ranking.

I have to admit that it’s impossible to find a data source that approximates the entire programming community, because many projects are closed source. Another consideration that comes to mind: It is not said that the developers are happy with their bread and butter language at work, for instance the Microsoft Kernel is written in C++. Should a popularity index somehow respect that the developers are free to choose the language and are not forced to do so? On the other hand there are developer surveys where programming language that are not largely used in industry, such as Haskell, have many fans and that’s what they write their hobby projects on weekends. However, I think that my approach offers a good approximation on what is considered to be a current popular programming language choice in the developer community.